Lions' put their foot down on Mostert's move to join Ackermann 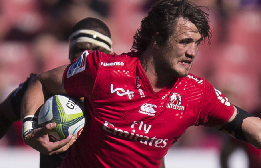 Mostert has captained the Lions side for most of the season in the absence of Warren Whiteley and his versatility operating at both flank and in the more familiar second row, will be of great benefit to his new club, where former Lions coach Johan Ackermann is now the head coach.

Gloucester want the duo to be available when the new British season starts. The Premiership’s first round begins at the end of August, but the Gloucester obviously want Mostert and Dreyer there for the preseason training.

But, the Lions Company’s CEO Rudolf Straeuli has put his foot down. According to Times Live, Straeuli said they are contesting the proposed move by Mostert it seems that they have agreed that Dreyer can more overseas.

“We are in dispute.

"We are contesting it because it is a transgression of World Rugby’s player movement regulations‚” said Straeuli.

“I can’t go into specifics of how we are fighting this but the process is under way. Our lawyers are busy with it. This is a legal dispute.”

Mostert is in the current Springbok squad and will no dubt play in the series againmst England which starts on June 9.

Gloucester’s director of rugby David Humphreys is thrilled that Mostert will be joining the Cherry and Whites.

“Franco has proved to be one of the stars of Super Rugby, and we are delighted that he will be playing in Cherry and White next season,” Humphreys told the club’s official website.

“We know the Gloucester fans love their physical, hard-working forwards, and Franco is exactly that. He has so many quality attributes, and this is a big sign of our intent as a squad to push to the next level.”

♦ It seems the transfer bus has passed for the Lions big centre Ruhan Janse van Rensburg due to the dilly-dallying in getting his contract sorted out.

During this delay, the England flyhalf Danny Cipriani has been invited by Gloucester to come. With with the new limits on the clubs’ cap for player payments, Janse van Rensburg cannot be afforded.

He still seems lost to the Lions, however. After a fill-in stint at the Sale Sharks, where he was a great hi on and off the field, this club seems sure to acquire his services.