Four Boks at the Lions helm 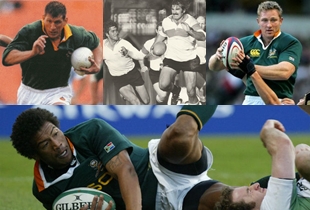 4 November 2016 - The Golden Lions Rugby Union (GLRU) have a rather unique team to guide them to success with four Springboks at the helm of the union and its teams.

The President Kevin de Klerk, CEO Rudolf Straeuli, head coach Johan Ackermann and executive board member Ashwin Willemse between them boast winning the Currie Cup on three occasions; winning two World Cups; a SA Player of the Year award; and being the oldest test Springbok at retirement since 2007 until June 2014.

It is also a feature that all four played for Transvaal/Golden Lions. Only De Klerk did not play Super Rugby.

♦  Kevin de Klerk played 105 matches for the Golden Lions and captained them 12 times, scoring 26 tries in his 14 years as a provincial player. He also captained Natal once in his only game for the coastal province before he returned to his beloved Transvaal.

De Klerk was first selected for the Springboks in 1974 against the unbeaten British and Irish Lions and played his last test in 1981, aged 31.

♦  Rudolf Straeuli crossed the Jukskei River from Pretoria and played for the Golden Lions from 1993 until his retirement in 1996. He captained the side 14 times and has 61 caps.

Straeuli was a member of the World Cup winning squad in 1995 and was on the field when Joel Stransky slotted the winning drop late in extra time. He played for the Golden Lions in the Currie Cup finals in 1993 and 1996 and was on the winning side in 1993.

Straeuli played in 10 tests and also had the honour of leading the Springboks onto the field in four tour matches in 1994: against Taranaki in New Zealand, and the on the year-end tour to the UK and Ireland against Cardiff, Newport and combined Irish provinces in Belfast.

Willemse played in 19 tests, and was a member of the 2007 World Cup winning squad. It was his second World Cup, and in the first in 2003 he was coached by Straeuli.

His rugby was curtailed by injury between 2004 and 2006 and he called it a day in South African rugby in 2007 after the World Cup.

Willemse returned to the Lions as an Exco member in 2013.

♦  Johan Ackermann first played for the Golden Lions in 1999 (31 matches) and played Super Rugby for the Cats 924 matches).

He held the record as the oldest South African test player (age 38 years 34 days) which after seven years of retirement was bettered by Victor Matfield. Ackermann is also the oldest SA player to participate in Super Rugby (38 years 272 days).

After a stint overseas Ackermann played for Griquas and the Sharks before returning to the Lions as assistant (forward) coach to Dick Muir in 2010 and was appointed head coach in 2012.

In the four years since he has taken the Lions to their highest number of wins in a Super Rugby season (nine) and won the Currie Cup with the Golden Lions last year.